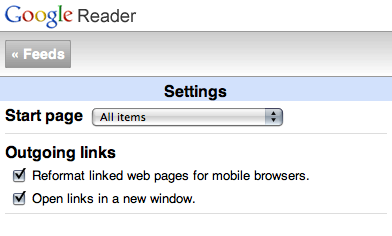 Much better. I still prefer the /m version of the mobile reader over the /i version, but as long as I don’t have to wait for the bloated ad heavy external pages to load in the mobile browser I’m pretty happy. The mobile version of Google Reader is usable for me again.

Update (September 23, 2008): Google has removed the redirect from /reader/m to /reader/i for both iPhone and Series 60 users (N95 and other Nokia smart phones). I am happily using the old /m interface again.

One of the killer apps I use daily on my N95 is the mobile version of Google Reader, http://google.com/reader/m. Until recently this was one of the best mobile web apps around, in my opinion, as the pages were extremely lightweight, easy to read and fast to load. This is roughly what the mobile interface to Google Reader looked like on an N95: 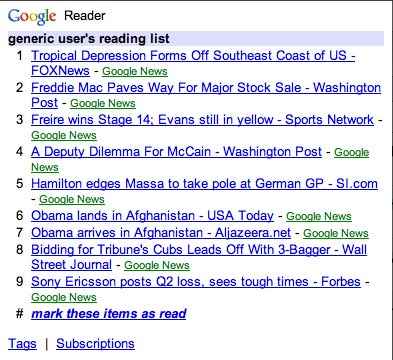 I say “looked like” because the user experience changed one week ago, coincidentally right around the time of the iPhone 3G launch. Some users, notably all iPhone and at least some Nokia phone users, are now automatically redirected to the Brand new Google Reader for iPhone, http://google.com/reader/i/, which looks like this on my N95: 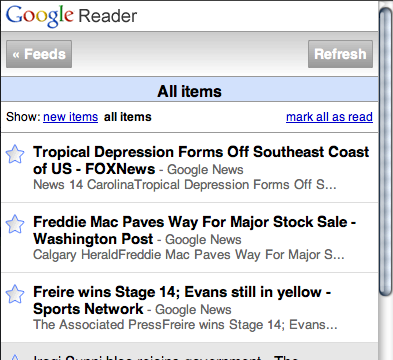 Yes, it’s all Web 2.0 and Ajaxy and stuff, but it’s also bigger, slower, less efficient, and less effective as an application for me.

Note these screen captures were done using Safari on a MacBook Pro, not on the actual phone. You get the idea, though, as this is still a good representation of what the pages look like on the phone. The images actually look nicer here. For example, the stars, which are clicked to “star” or highlight an item, don’t show up on the N95.

I’m not the only one experiencing disappointment about this change, although it seems most of those upset are using an iPhone and not an N95 or some other phone. While I believe it’s wrong to force the /i interface down users’ throats for anyone, even iPhone users, it’s a bit disturbing from a development/QA perspective that non-iPhone devices are affected as well, and that this has been the case for a week now.

Unless this is intentional.

Assuming it’s not, the reason non-iPhones are affected is likely related to the browser user agent on the Nokia phones:

The N95 browser advertises itself as Safari, probably because it uses Apple’s WebKit. It also very clearly shows that this is a Nokia device, and not an iPhone.

The only response from Google so far has been:

Thanks for your feedback on the recent changes to Google Reader for your iPhone. Could you all confirm that you are using the latest version of your iPhone’s firmware? The latest update offered by Apple improves performance significantly and using Google Reader should not cause poor performance, even on EDGE iPhones.

I’d also like to let you know that we hear your feedback loud and clear regarding allowing the original, HTML version of Reader on your iPhone as an option. I’ll post an update to this situation shortly. In the meantime, please let me know if updating to the latest version of your iPhone’s firmware doesn’t solve the issue.

Not much help to me. Can I just have access to the /m interface again?

Additionally, navigating to the original article from the /m interface results in a page that is tailored to a small screen mobile device, which looks something like: